I’m doing Pajiba’s Cannonball Read again this year, and I just posted a review of Pictures at a Revolution: Five Movies and the Birth of the New Hollywood by Mark Harris. Stop by and check it out!

On Harry Potter (A review, with some other thoughts thrown in)

I finally saw Harry Potter 7.2 last weekend. Prior to seeing it on Saturday, my head was full of all the things I wanted to write about it. I count myself a pretty big fan … not from the beginning, but pretty close. I saw the first movie in a midnight showing, and blah blah blah. I was going to recount for you my personal experience with the Harry Potter franchise.

And then I saw the movie. After that, I found I had very little to say. Because it was over. Really and truly, properly over. And I’m totally fine with that. I believe this is what is called “closure.” Of course, though, there’s plenty to say about the individual movie, and about its position within the larger franchise, so we’ll do that. Onward! If you have not read or seen any Harry Potter by now, I am going to assume that you have no interest, and are therefore skipping this post. If you are, on the other hand, into it, I don’t feel that I need to give you the usual synopsis. You know the story by now.

I think that, taken collectively, Harry Potter and the Deathly Hallows is probably my favorite of the movies. I know that a lot of people thought part one was excessively boring, what with Harry, Hermione, and Ron just sort of wandering around and experiencing a lot of teenaged angst. That movie did exactly what it was supposed to do, though, in setting up all of the events of part 2. Additionally, I really enjoyed the opportunity to take a break from all the action, as it were, and take stock of the characters themselves. They’d been forced to grow up at an exponentially faster pace throughout the series, and in the Deathly Hallows, we get a chance to see how that growing up as worked out for them. They’re making tough choices, realizing things about themselves and each other, and they’re facing up to a pretty grim reality. The actors, too, have grown up, and we’ve witnessed that as well. They’ve all become very capable, and that was an enjoyable thing to watch.

With regard to 7.2, I think that it picked up very smoothly from where 7.1 left off, both in terms of the plot and the abilities of the actors/development of the characters. In the end, I think that Daniel Radcliffe, Emma Watson, and Rupert Grint have all done a fine job, never mind the glittering cast of supporting actors, most of Britain’s finest. There’s really nothing bad to be said about the acting. Three cheers for Ciaran Hinds, completely unrecognizable as Aberforth Dumbledore. Three cheers for Matthew Lewis, who has grown (along with his character, Neville) into the unsung hero of the franchise. Hurrah for Maggie Smith and Julie Walters getting to have some fun scenes. And finally, a round of applause for Helena Bonham-Carter for bringing a great amount of good, scary fun to her role as Bellatrix Lestrange. The supporting characters of these movies really show you how quality the entirety of the franchise has been.

I can’t leave the acting side of things, of course, without saying a few things about Alan Rickman, and his character, Severus Snape. Let me be clear: I really loathe Snape. We’re supposed to. Heroism aside, he’s still a pretty deplorable human being. Having said that, however, I think that the major failing of the Harry Potter film franchise is that it did itself (and viewers) a disservice by not giving Rickman enough screen time throughout. That includes the final movie. Rickman was, of course, fantastic, but I still feel as though he didn’t quite get his due. That may fall into the final analysis, though, which I’ll get to in a minute.

What I initially thought about the movie was that it felt very perfunctory. It moves – bam, bam, bam – from important point to important point as if it’s checking items off of a to-do list. The second half of Deathly Hallows is all action, though, so it makes sense that it would be that way a bit, and besides, we all wanted to see those important points. The audience I was part of definitely cheered the big moments of McGonagall, Molly, and Neville. What is less enjoyable, though, is the way in which some more dramatic moments (Snape, Fred, Tonks & Lupin) seem to get passed over in the rush to get back to more action.

Here’s the main point I want to make, though. I came to realize it yesterday, after reading RTM’s final assessment, in which she declares that HP7.2 doesn’t deliver on its advertised “epicness.” The very best thing about the world of Harry Potter is this. While J.K. Rowling created an incredibly rich and imaginative world, she filled it with real people. Magic abilities aside, all of the characters could be people we know. They’ve got strengths and flaws, some of them are equal parts good and bad, they feel happiness and pain, and they live. It is my opinion that the movies captured that aspect as well, particularly the last two. As such, I don’t think that we should want for the final act to be “epic” in the sense of a summer blockbuster. What it does convey is so much more real than that. It conveys a world in which nobody knows whether they’ll live to see tomorrow, a world in which young people are asked to make sacrifices and look inside themselves to find bravery and strength they didn’t know they had. The final days of the battle these people are waging are not epic; they’re exhausting. They’re moment after moment of triumph and then despair. One step forward, two steps back. And to me, whether or not I would’ve liked a few more moments to weep over the deaths of “friends”, or a bit more screen time for certain characters, the movie captured that perfectly. The movement from point to point signals a sense of numbness, of the job still to be done, in spite of everything else. And in the end, there’s no celebration. It is epic, but in a quiet way. This is the way the world ends. Not with a bang, but with a whimper.

Finally, the only thing left to say is Thank you. Thanks to Ms. Rowling, and to all of the people who brought her world to life. All the little nit-picky complaints we have about the movies should give way to the realization that we care enough to make them, and that means that something amazing has happened, and that it will not be easily re-created any time soon. From the first moment to the last, I’ve enjoyed every second, and I look forward to sharing it with my daughter (when she’s old enough) in the hopes that she, too, will find it all magical.

Another movie star bio, this time the story of the famous love affair between Elizabeth Taylor and Richard Burton. It’s a great book, and you should check out both it and my review!

I’ve just finished another biography, this time of the incomparable Judi Dench. Click here for my review!

I’m participating in a book reading and reviewing activity this year. And since I promised, long ago, that there would sometimes be book reviews on this site, I figured I should deliver. As such, here’s the link to my “review” of Me: Stories of my Life, by/about Katharine Hepburn. It’s kind of a hard to thing to really review, but I tried to outline a bit of what to expect in addition to my impressions of the book. Enjoy! 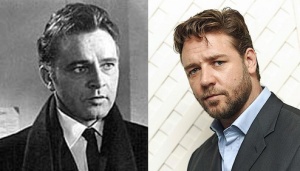 Alright, alright. I am forced to comment on this. A recent book (which is on my list, but I haven’t read it yet) entitled Furious Love: Elizabeth Taylor, Richard Burton, and the Marriage of the Century, chronicles the story of, well, the marriage of the century. Taylor and Burton were both huge stars, and the ups and downs of their relationship would put just about any tabloid celebrity today to shame. And of course, now there’s talk of a movie, with appropriately huge names being rumored to star. In contention, supposedly, for La Liz, are Angelina Jolie and Catherine Zeta-Jones. My take? Advantage, CZJ. And for Burton? Three names: Clive Owen, Colin Farrell, and Russell Crowe.

Ahem. I know what you’re thinking, and I have no real references to vouch for my ability to keep biases in check, so I’m not going to dissuade anyone here, probably. However, I think that Crowe is a simply brilliant idea for Burton. There are no other current big-name actors who would match the physicality (Burton and Crowe were/are both shortish and stocky, rugger-types) and intensity that exemplified Burton. I do say this having not yet seen any of Burton’s films, but that will be rectified shortly. There’s one problem, though, and it’s not necessarily a small one. Russell Crowe is 45 years old, people. Make-up is good these days, but I guess I wonder about the extent to which they will want someone younger to portray Burton in his heydey. In Crowe’s favor are the facts that Burton lived extremely hard, and died when he was only 58. But still. Even I have to admit that the age factor is a bit problematic. Which is really too bad, because again, I think it’s a tremendous notion.

As far as I can tell, all of the talk surrounding this project is in extremely early stages. It’ll be interesting to see what happens, but somehow … I don’t have a lot of optimism. The other two notions, Clive Owen and Colin Farrell, are not, IMO, good options. I really like both of them as actors, but I tend to hope for at least a little accuracy in matters of casting, and I don’t see either of them as a good fit for the look/feel of Mr. Burton.