I’m trying to catch up on some things, and so today, you get a bit of a questionnaire, supplied by Ruth over at FlixChatter. Here are my answers to her 11 questions:

I really want to say Nathan Fillion, but he’s always been more TV-oriented, so I guess I can’t count him. Is Gabriel Byrne still doing In Treatment? I don’t watch enough TV to answer this question, obviously.

2. Could you date someone who does not love movies?

Probably, but it wouldn’t be very much fun. My husband has gotten more into movies since we’ve been together, and it’s really great to watch things and embark on projects together. And he puts up with me talking about them all the time.

3. What made you want to have a movie blog?

See the above. I was just talking about movies constantly. Still do, but now I have an outlet for that. Plus, I’ve found opportunities for branching out in terms of what I watch.

4. Which director/actor collaboration would you like to see? [It has to be people who have never worked together before]

I want Kenneth Branagh to do a big-budget adaptation of Richard III, starring Geoffrey Rush. They haven’t worked together that I’m aware of.

5. What dish are you good at making?

I made some sweet potato scones the other day that my husband declared his second-favorite baked good ever…I guess I don’t really have a signature dish, though. Generally, most of the things I cook turn out pretty edible, if I do say so myself!

6. Any encounter with a celebrity you care to share?

My brother and a friend of his flew out to visit when we lived in LA for the express purpose of going to see the RSC production of King Lear starring Ian McKellen. It just so happened that Tom Hanks and Rita Wilson were attending the same performance. We didn’t talk to him at all, but we were standing less than five feet away from him at one point. He was a lot handsomer in person than I expected. Ian McKellen was also really awesome.

7. Since the Olympics is still going on, what’s your favorite movie set in London?

Probably Notting Hill. I love all the shots of the outdoor markets, plus they wander around a bit in the swankier areas, like Anna’s hotel.

8. Which is your favorite movie writer? [Could be a journalist, novelist, etc.]

I don’t know. Guess I haven’t thought about it much. Can I say Shakespeare, since he’s so heavily adapted? I do think Aaron Sorkin does good work; both The Social Network and Moneyball were impressive. Ooh, and Tom Stoppard! (Please note that the image above is Joseph Fiennes as Shakespeare in Shakespeare in Love, which was penned by Mr. Stoppard. So clever.)

9. Which do you prefer: sweltering heat or cool, rainy days?

Having experienced both today, including running in some major early-morning humidity, I’ll say rainy days, although it really just depends.

10. Favorite outfit/costume from a movie? 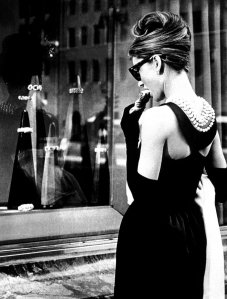 I think I’m going to have to probably be super-cliche and just say everything Audrey Hepburn wears in Breakfast at Tiffany’s. It’s just all so iconic. I actually love her “slob” outfit toward the end, and have tried many times to duplicate it, but I just don’t have the right build.

11. Which actor/actress did you initially detest but then slowly warm up to? [Feel free to reverse the question, that is an actor you initially loved but now can’t stand.]

I used to really hate Drew Barrymore for no good reason, but now I am quite fond of her. She’s not brilliant, but she’s very charming and funny and she obviously works hard. Plus she produces, and I thought her directorial debut (Whip It!) was pretty good.

This entry was posted in Just for Fun. Bookmark the permalink.

One response to “Eleven questions”