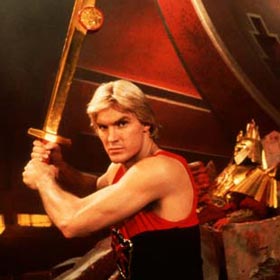 Ah yes, time once again for me to foist my favorites off on you. I’ve been pondering my next post of this nature for a while, trying to come up with something different from Amelie. A musical? Too girly. I struggled with not just going on (again) about Master & Commander. And tonight, inspiration! A fellow blogger, who gets mentioned around here quite a bit, is a die-hard fan of one Mr. Timothy Dalton. And he’s got a new movie coming out, and she’s excited about it, and that made me remember my favorite Dalton movie: Flash Gordon.

Oh yes. I know what you’re thinking. I can’t be serious. It’s so … eighties. It’s so campy you can’t see the trees for the tents! The effects are sooo bad. Some of the acting is downright atrocious. I know, I know, I know. It’s a ridiculous- yet wonderful– movie. I mean, c’mon. How can you go wrong when the entire soundtrack is provided by Queen?? How can you not absolutely adore … wait. Let’s backtrack.

Flash Gordon began life as a futuristic comic strip in the 1930s. There were also a few films in the mid-thirties, starring Buster Crabbe. There were also radio dramas. And then, no doubt riding the wave of the Star Wars craze, in 1980, there was this splashy cult classic, starring a hunky blond named Sam J. Jones. Originally, Flash Gordon was apparently a polo player who manages to find himself on a far-away planet, accompanied by the brilliant scientist Dr. Zarkov and a dishy sidekick named Dale Arden. They have lots of adventures and fight against the megalomaniacal Ming the Merciless, ruler of the planet Mongo.

In the film version, Flash becomes a professional football player, but the rest of the general plot line remains the same. Planet Earth is under attack, suffering from pretty much every possible natural disaster at the same time. Dr. Zarkov (a delightfully mad Topol) is a NASA scientist who loses credibility when he claims the attacks are coming from outer space. Flash and Dale Arden (Melody Anderson, milking the damsel in distress thing) end up being kidnapped by Dr. Zarkov and blasting off in his rocket to discover, if they can, Earth’s attacker and stop the bombardment. Many adventures ensue once they reach the planet Mongo and encounter Ming (Max von Sydow), his uber-sexy daughter Aura (Ornella Muti), her handsome suitor Prince Barin (Dalton, seriously hot), and my favorite, Voltan, king of the Hawk People (Brian Blessed, gleeful).

So now are you interested? Clearly, Mr. Jones and Ms. Anderson are not names that anyone remembers, but otherwise, it’s a reasonably impressive cast: Topol, von Sydow, and Dalton are fairly respectable names, and even if you don’t necessarily know Blessed’s name, he’s been around forever and is freaking awesome. I’m sort of wondering why I didn’t include him on my character actor post, actually. Maybe I should do an all-British one next time. Anyway.

Many adventures are had. Naturally, there is romance and danger and cheesy special effects and in the end, the good guys win. Seriously, it’s fabulous. It was probably in the mid-eighties when I first saw it. I was probably about ten. I find it a little surprising now that my mom let us watch it … it’s never over the top either in terms of sex or violence, but it’s definitely fairly suggestive in spots. Ming and his daughter are pretty hot-blooded individuals, and those earthlings are quite easy on the eyes. With the possible exception of one or two scenes that are a little disturbing, the violence is pretty cartoonish, too. I think we just had such a love of science fiction and fantasy in our house that Flash was fair game.

Now you’re thinking “Oh. She saw it when she was ten. Of course she thought it was great. She was a little kid!” But not so fast! I have seriously seen this movie probably about 15-20 times in the course of my life, and I still think it’s awesome. It’s pretty much a cult classic. I used to own it on DVD, but I think an ex-boyfriend ended up with my copy. Realistically, I can admit to the camp and the bad acting, but there’s just something so fun about the whole thing. It never takes itself seriously. The dialogue is bad in spots but not necessarily any worse than a lot of other things that may be considered better movies. The effects are laughable, but again, they were for lots of things. Have you watched The Black Hole lately? Or Moonraker? Oy. It’s not pretty. I know nowadays people scoff at the effects in the Star Wars movies, even, but they are superior to some of the stuff that came after in imitation. What I’m saying here is, give Flash a chance.

Oh man. Seriously, now I need to watch it again. Why isn’t it available for instant view? Netflix, get on that! Anyway, seriously: the next time you just want to watch something fun and silly, with some pretty decent (if dated) eye candy and a rockin’ soundtrack, think of your buddy Flash. He’ll save every one of us! And as always, if you do take my recommendation, please tell me what you think. Even if it’s just that I’m nuts.

This entry was posted in Favorites, Just for Fun. Bookmark the permalink.